I am trying to source a replacement capacitor but am a little unsure what will be correct as a replacement. Usually with capacitors I would always swap like for like to remove any possible issues. Unfortunately I can't seem to source the faulty one which is a facon 21uf 330v  -0%+20%. I've tried several suppliers but seems they don't want to say what would work as a replacement, you'd think if they're supplying them they'd be able to advise the best option when swapping.

Ive read online that the voltage is not an issue so long as you go higher than the one you are swapping i.e 450v instead of 330v. Obviously the uf rating has to be the same, or as close being slightly over I believe?

My main issue is with regards the tolerances and whether they need to be withing a certain parameter when swapping. I've seen one from a supplier which is 21-25uf 330v but doesn't say what tolerance is. Would this be a good swap or would I be better going for a universal one 22uf 450v +-5%?

Size is not an issue as it is from a refrigeration unit so plenty of space to fit it in and it is running the compressor along with another 25uf capacitor.

I've attached an image of the one I'm looking to change which is faulty.

Ay advice would be greatly appreciated and also if anyone knows anywhere that has some good information on this kind of thing for future, that would also be great. 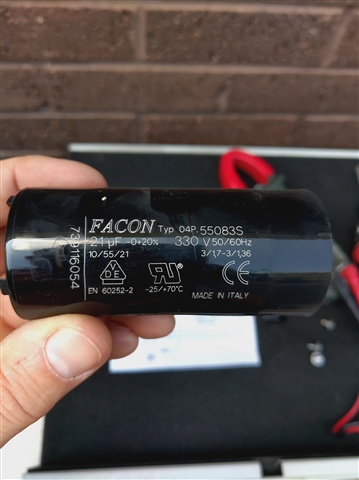