Technical visits are real highlights of our Singapore Network activity, presenting opportunities and insights that are difficult to obtain without the reach and influence of a professional organisation. 20 members and aspiring engineers were able to appreciate such an experience with the visit on 12th May 2016 to tunnel works on the Woodlands section of the Thomson-East Coast Line.

This 43km new line will add 31 new stations to the existing rail network, with 7 interchange stations to link with the East-West, North-South, North-East, Circle and Downtown Lines.

The visiting team assembled at the Hampshire headquarters of the Land Transport Authority (LTA) and each person was issued with the personal protection equipment essential for entering the T206 construction site where the Earth Pressured Balanced Machine (EPBM) and Slurry Tunnel Boring Machines were to be witnessed. Once ready, the team boarded the coach and set off for Woodlands in the North of Singapore, reaching the tunnel excavation site in good time. Settled into the main briefing room in the Site Office, the visiting team paid attention to the LTA hosts as they gave briefings on safety procedures and the project targets and progress in overcoming the many challenges presented by tunnelling variously through hard granite and soft clay.

Briefing complete, the visitors were led across the site to a very large and deep opening from which one of the tunnels was already about 800 metres progressed. Unlike on earlier visits to tunnel sites, this time there was the luxury of a lift to take small groups in turn down to the working level. Upon everybody reaching “downstairs” they proceeded single file into the tunnel, walking quickly along the temporary walkway bolted onto the side wall. Up on the wall were large pipes to send pressurised slurry lubricant to the tunnelling face and return the newly drilled debris along then up to the surface for processing and re-use in the boring action. The visitors eventually reached the very long, large and massive Slurry Tunnel Boring Machine and were told how it operates. The machine uses external pressurized slurry to stabilize the cutting face. This slurry is circulated to transport the excavated soil by fluid conveyance using slurry feed and discharge equipment to circulate and pressurize the slurry. Up at ground level, the Slurry Treatment Plant (STP) processes the slurry and adjusts the fluid properties. The machine was paused for a short time for some maintenance processes, fortunately allowing the visiting team to hear about the machine operation and see how the highly accurate boring process was conducted.

The visiting team exited the tunnel, took the lift up to the surface then went round to another access opening for the second tunnel being bored, this time by an Earth Pressured Balanced Machine (EPBM). This tunnel already had a rail-track fitted to allow a large transport engine to transfer mud and rock clawed from the tunnel face out into the access shaft then to be hoisted up to ground level for separation, grading and recycling. At the tunnel end, another long and massive machine was in operation. Boring was temporarily suspended as it was time to fit the next set of tunnel ring sections. Tunnel progress is reckoned by the number of rings fitted. The visitors learned that every single ring section is specially designed and manufactured off-site to fit uniquely into its prescribed position against the tunnel wall. The boring machine pushes against the already fitted rings to tunnel further. When sufficient room to fit the next rings has been created, a special vacuum manipulator manoeuvres each new ring section from the track under the machine, up and round to the exact fitting position and is then held in place for the tunnel team to bolt it in place. The team learned that the EPBM uses an excavation system to cut the soil. This excavated soil is pressurized and held against the oncoming soil pressure to stabilize the cutting face. There is a

mixing system to mix the excavated soil into mud pressure, a soil discharge system and a control system to keep the soil pressure uniform. The EPBM is not used for rocky soil that is difficult to convert into slurry but used more in ground with mainly clay soil.

Once everybody had taken turns to move up close and view the ring installation, all filed back to the surface and returned to the briefing room where they thanked the kind hosts, presenting a memento to each speaker. Upon returning by coach to the LTA headquarters, the visiting team enjoyed a lunch and networking session before returning to work.

All agreed that the visit was very worthwhile and informative. The two students who had joined in were very impressed with this wonderful demonstration of heavy engineering and were able to talk with members about engineering as a professional career. In addition, members were able to log 5 hours of Continuing Professional Development. This was a very successful and educational technical visit for which IET Singapore Network wishes to record its sincere appreciation to the LTA for enabling it to take place despite their intense project activity. 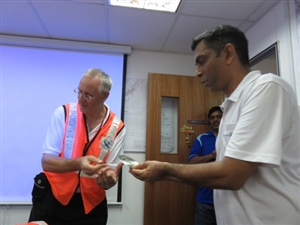 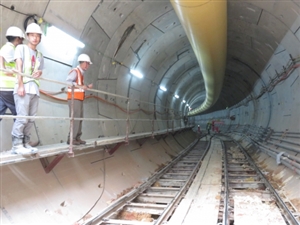 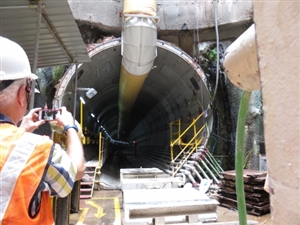 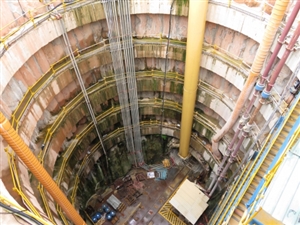